What is the best launcher app for macOS?

LaunchBar vs Alfred vs Quicksilver vs FastFolderFinder compared

Launcher apps help you do stuff on your Mac really quickly, without taking your hands off the keyboard.

Hit a keyboard shortcut to open the launchbar, search for what you want, and hit return. They make complex tasks really easy.

I’ve compared Launchbar, Alfred, Quicksilver, and FastFolderFinder in this post.

TLDR: Alfred is the most powerful and most customisable launcher app.

If you want something simpler and easier, FastFolderFinder makes it easy to open folders and apps.

(Disclaimer: I built FastFolderFinder. So, like, I’m pretty biased?)

What is a launcher app?

Launcher apps help you do stuff on your Mac heaps faster.

They let you set up a keyboard shortcut that triggers the launchbar to appear.

Then you use the launchbar to to open apps and folders, execute scripts, do calculations, search the web, and on and on…

All without taking your hands off the keyboard or navigating through a bunch of different apps.

FastFolderFinder: Simple and easy, but not extensible

I personally use launcher apps for three things: opening apps, quickly navigating to folders in Finder, and opening my projects’ folders in specific apps like VS Code, Sublime Text, and iTerm.

I built FastFolderFinder with those three tasks in mind. Plus it’s super fast and the fuzzy search is great.

If you want something simple and easy, maybe try FastFolderFinder. Otherwise, use Alfred, LaunchBar, or Quicksilver.

Alfred: Powerful and customisable but… it’s a lot

Price: Free to try, Powerpack is $40 for version 5 updates, $70 for lifetime updates

Alfred is my go-to recommendation for people getting into launcher apps.

It’s extremely powerful, very customisable, and tends to have a feeling of “it just works.”

You’ll be able to find your files, launch apps, do calculations, search the web, and a lot more, all from one launchbar.

The only downside is that there are a lot of settings to tweak. There are like 15 different panels within the “Features” section of the app’s preferences window. Check out the screenshot below.

For some people, this is a good thing; for me, it’s a bit overwhelming. 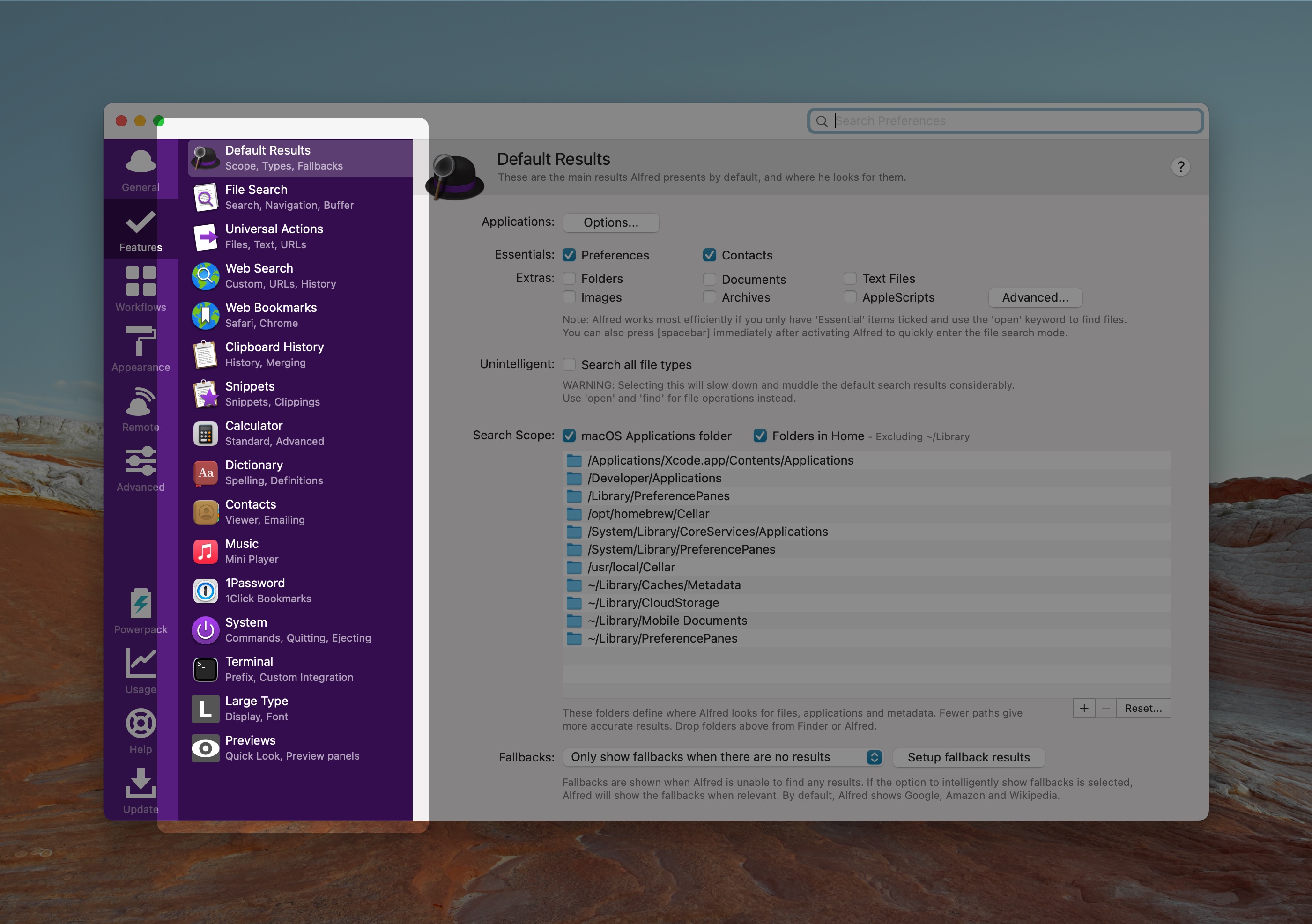 LaunchBar: Great but the UX doesn’t quite click for me 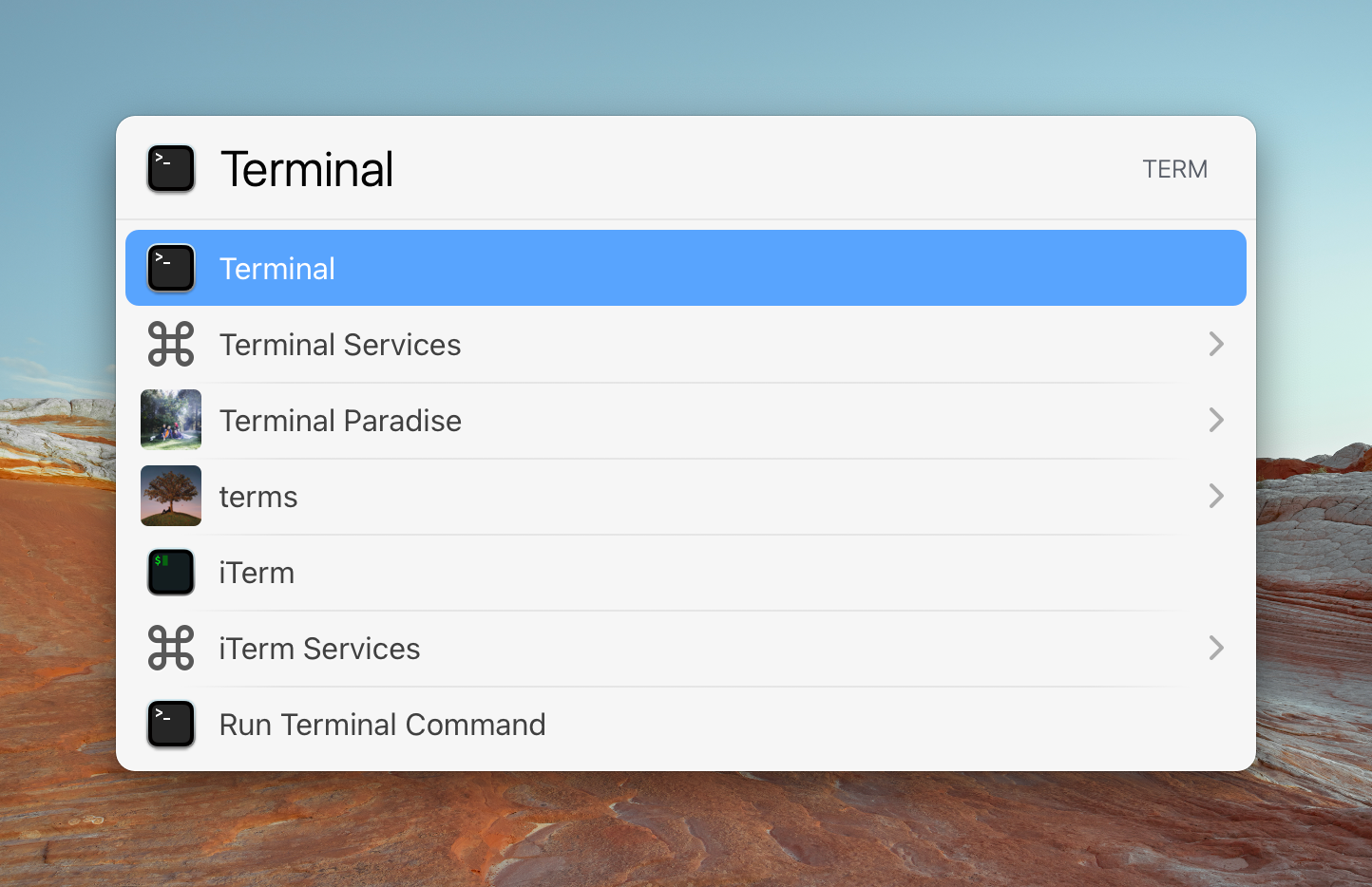 LaunchBar is the main competitor to Alfred.

It’s a bit simpler to customise, a bit cheaper, but still offers a tonne of functionality and power.

The only thing I didn’t like about it was that some of the “how it works” part of the design didn’t match my expectations for how an app should work. For example, hiding the launchbar takes multiple Esc keypresses, the text input box doesn’t have a cursor I-beam, and the default font feels off. 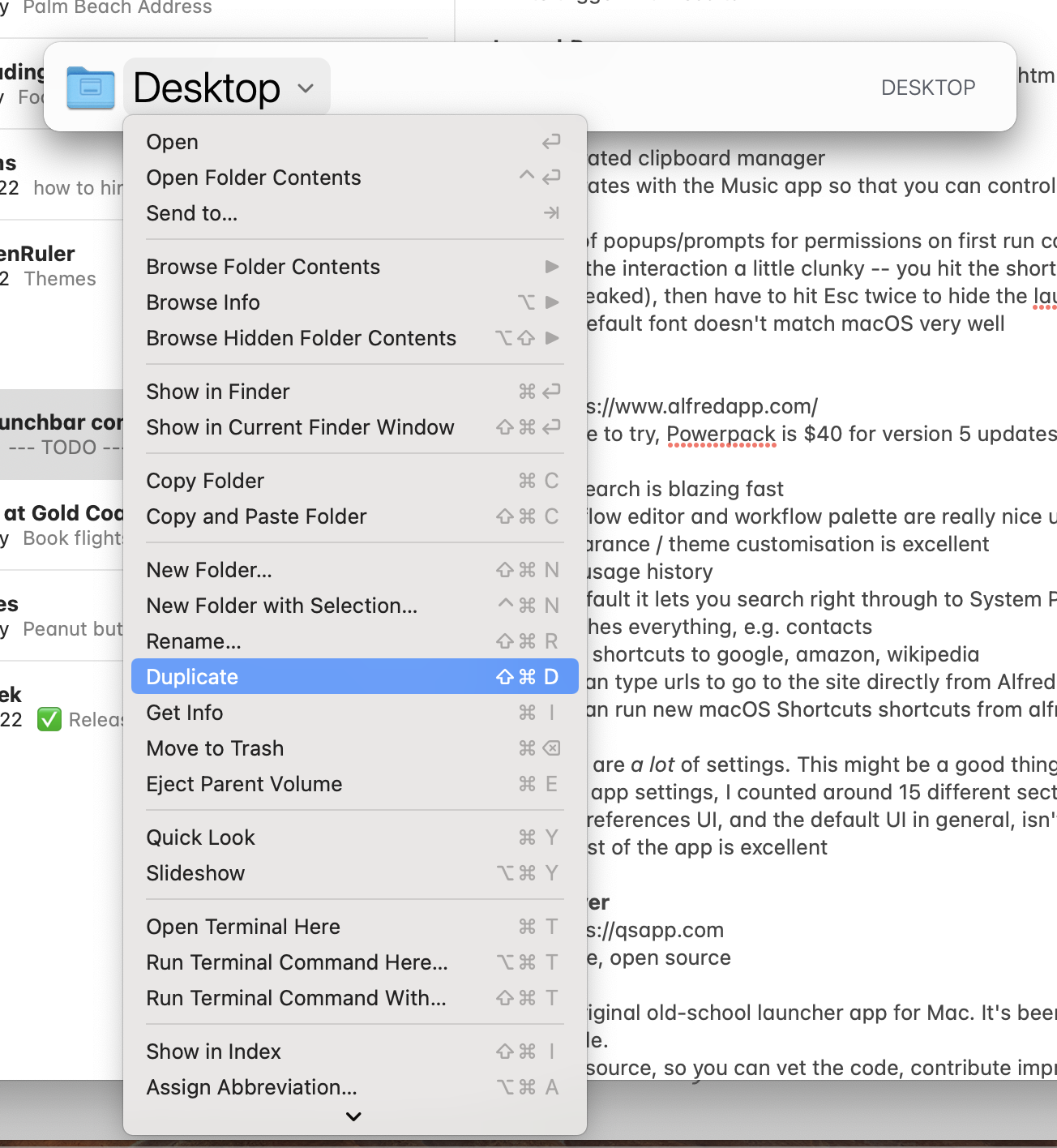 Quicksilver is the oldest, most mature app launcher app on the Mac. For me, it basically defined the category for a lot of years.

It’s free and open source, and gives you a lot of customisability.

Conclusion: which macOS launcher app is the best?

For people who want a really powerful tool, I’d recommend Alfred as a starting point.

It’s free to download, has a bunch of powerful features, and can be fully customised to do anything you want. Its default UI style doesn»t quite “blend in” with the system, but the default theme choices are pretty good, and with the Powerpack it’s customisable enough to get it looking the way you want. And with the Powerpack you get Workflows, which are a feature that’s only available in Alfred.

However… for people after something simpler, I personally use FastFolderFinder.

Jump on my email list to get sent the stuff that’s too raunchy for the blog.
(Seriously though, it’s an occasional update on apps I’ve built and posts I’ve written recently.)